The Blueprint for Large Enterprise Order-to-Cash

Through a basic understanding of each word’s meaning, this side-by-side comparison conjures up visuals of a biblical battle between David and Goliath or maybe an elephant in close proximity to its overlooked, much-feared prey, the mouse. Anything putting up a much larger, yet slow-witted and lumbering giant against a smaller, spry and resourceful foe.

Lumbering giant… spry, resourceful foe….. You can see where our allegiance lies in this virtual battle.

In the software application game, monolithic architecture had a good run, dominating enterprise IT applications for the past couple of decades and then some, but time is up. An entire system providing an enterprise with a single point of failure means incredibly tight governance, long development cycles and the possibility any functionality change could impact everything and require extensive regression testing.

Sounds pretty lumbering, if you ask us.

Those challenges are all in direct conflict with the fully-in-swing IT evolution from traditional models to the digital enterprise, which puts a premium on availability, scalability and speed. 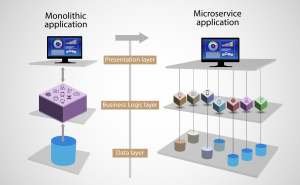 The Need for Speed…and Scale

Such demands have fueled the need for a more granular approach to application architecture, making the microservices architecture style–in which applications are essentially decomposed into loosely coupled services–the sensible choice for today’s enterprise. Offering more lightweight protocols and finely-tuned services, microservices can deliver heightened modularity to ensure the applications are easier to develop, test, deploy, change and maintain.

Microservices can not only be easily extended in support of new functional requirements, but support new business initiatives with little overall disruption.

Or, as IDC noted a few years back, “By 2022, 90% of all apps will feature microservices architectures that improve the ability to design, debug, update, and leverage third-party code.”

In a 2021 survey of more than 1,200 IT executives either using a microservices approach or exploring adoption, an IBM team reported a number of bottom-line benefits including improved employee productivity, customer satisfaction and time to market speed.

“In a time of unrelenting change, microservices make it easier to act with agility,” stated the IBM survey report. “They enable you to be ready for what’s next.”

There’s a reason RecVue took the more nimble microservices design approach in creating a monetization platform a few years back, having scanned the wasteland of failed monolithic designs weighing down tied-to-the-hip enterprises.

Those legacy applications using older technology from 20+ years back, developed under a singular structure, remain problematic due to the interconnected and interdependent nature of a self-contained system. Any change, update or new technology stack adoption becomes more challenging when the entire system becomes the impact target. They couldn’t be broken up even if they wanted to.

Microservices designs such as RecVue were built for speed, to roll things out fast and integrate quickly and efficiently. This is a fundamental building block of the platform, designed to be broken up, for scale on a massive level. The large enterprise undergoing a digital transformation requires performance and scale. Strip down a microservices design to the essentials – a reduced codebase of each modular element of an application simplifies releasing, scaling, deploying and testing different services to a much more manageable level.

If you’re going to start an order-to-cash process for a large enterprise, microservices is the blueprint. A modern SaaS solution built for global enterprise-grade complexity and scale requires microservices architecture.

Consider how RecVue helped Textainer, one of the world’s largest lessors of shipping containers with a fleet of more than 3.5 million, handle asset billing. In seeking out an update to a billing system last modernized for Y2K, Textainer leaders posed the question to RecVue if the system could handle their asset billing needs involving complex contracts, a cumbersome billing process of 40+ unique reports and queries and multidimensional pricing factors.

Upon receipt of the necessary requirements, the RecVue platform proved capable of handling Textainer’s asset billing needs because of its microservices design. For any other system, this would result in a great deal of customization. To learn more about Textainer and RecVue, please download our case study.

If you would like to learn more about how the microservices architecture of RecVue’s Order-to-Cash solutions could help address your organization’s complex billing processes, contact us for more information or to schedule a demo.

Revenue and Compliance Should Not be Complicated.