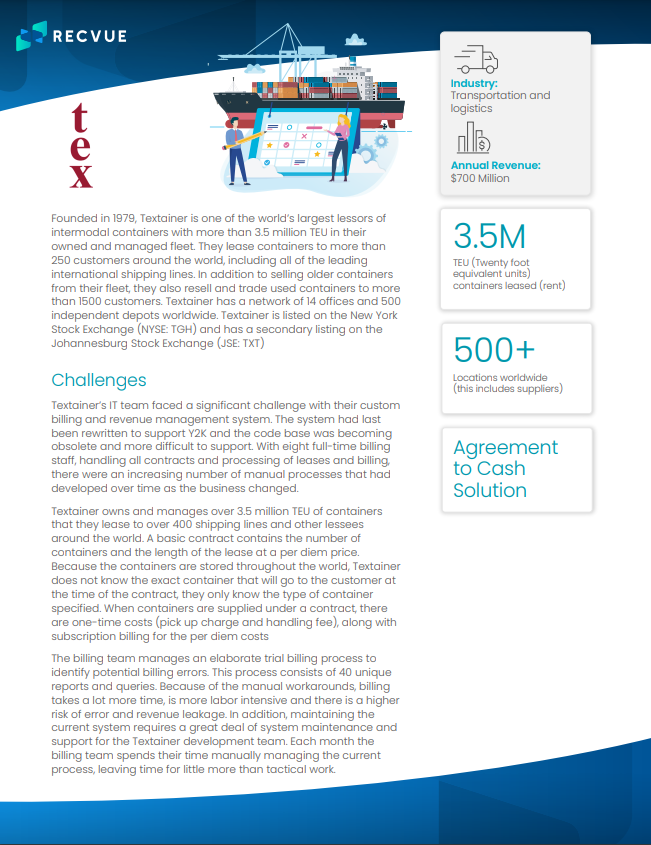 Founded in 1979, Textainer is one of the world’s largest lessors of intermodal containers with more than 3.5 million TEU in their owned and managed fleet. They lease containers to more than 250 customers around the world, including all of the leading international shipping lines. In addition to selling older containers from their fleet, they also resell and trade used containers to more than 1500 customers. Textainer has a network of 14 offices and 500 independent depots worldwide. Textainer is listed on the New York Stock Exchange (NYSE: TGH) and has a secondary listing on the Johannesburg Stock Exchange (JSE: TXT)

Textainer’s IT team faced a significant challenge with their custom billing and revenue management system. The system had last been rewritten to support Y2K and the code base was becoming obsolete and more difficult to support. With eight full-time billing staff, handling all contracts and processing of leases and billing, there were an increasing number of manual processes that had developed over time as the business changed.

Textainer owns and manages over 3.5 million TEU of containers that they lease to over 400 shipping lines and other lessees around the world. A basic contract contains the number of containers and the length of the lease at a per diem price. Because the containers are stored throughout the world, Textainer does not know the exact container that will go to the customer at the time of the contract, they only know the type of container specified. When containers are supplied under a contract, there are one-time costs (pick up charge and handling fee), along with subscription billing for the per diem costs.

The billing team manages an elaborate trial billing process to identify potential billing errors. This process consists of 40 unique reports and queries. Because of the manual workarounds, billing takes a lot more time, is more labor intensive and there is a higher risk of error and revenue leakage. In addition, maintaining the current system requires a great deal of system maintenance and support for the Textainer development team. Each month the billing team spends their time manually managing the current process, leaving time for little more than tactical work.

Textainer’s new CEO had charged the IT department to upgrade their accounting and billing system. The marketing team at Textainer also required more flexibility to accommodate new leasing structures and complexity. After evaluating Oracle and Microsoft products for a new ERP system, they still did not find the right solution for the billing component of their operation due to their unique billing requirements.

“The Oracle Cloud ERP billing solutions were not a good fit for our billing and self-billing requirements. It could not handle the complexity of our contracts,” said Gregory Coan, CIO, Textainer. “We were beginning to think we would need to build our own solution once again.”

One of Textainer’s critical requirements was the ability to account for revenue and expense on a per container basis. This creates several challenges when billing customers and paying vendors. Rather than build their own custom solution, Textainer’s Oracle account executive suggested they evaluate a sophisticated 3rd party billing solution on the market, RecVue.

“We have several objectives in mind as we embark on our new ERP Project—we want to automate our support functions to the greates textent possible, we want to simplify our processing of our billing and self-billing functions, and we want to implement state of the art IT resources” said Coan. After evaluating RecVue, we realized we had found a solution that aligned with the complexities of our business.” Textainer’s large customers are pushing the industry to drive digital standardization. Now Textainer has a flexible monetization platform that will enable them to structure leases for their clients in new ways and meet these industry demands. With RecVue, Textainer will automate the entire order-to-cash process, enable pricing and contract flexibility and eliminate revenue leakage.

After evaluating RecVue, we realized that we had found a solution that aligned with the complexities of our business.”